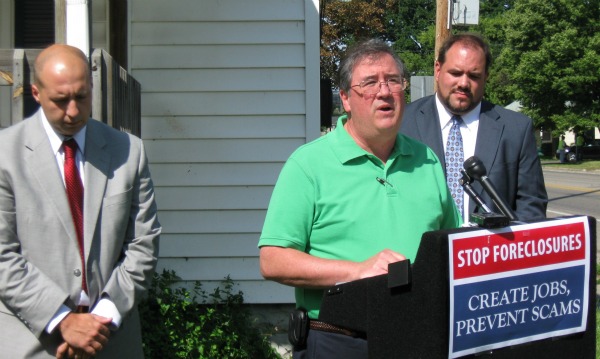 The tidal wave of home foreclosures in Michigan has some state lawmakers grappling with ways to stem the tide. When they return to the state Capitol on Wednesday, some are expected to resume talks on a number of foreclosure reforms.

Many of the thousands of foreclosure filings have involved shadowy organizations whose only job has been to process documents as quickly as possible. Critics say a couple of signatures can trigger a tragic string of events that is devoid of due process. Reformers are hoping a proposal to prevent so-called “robo-signing” and other fraudulent and abusive practices will one day become state law.

By now, you may have heard of Linda Green. Ingham County Registrar of Deeds Curtis Hertel Jr. certainly has.

“Linda Green is a mailroom clerk,” he says. “She never signed actual(ly) documents. It was actually people that were paid $13 an hour to sign her name. The reason they picked her name was because she was easy to spell.”

This famously unknown figure at the heart of America’s robo-signing foreclosure scandal does indeed exist. But she was never a bank executive authorized to sign off on thousands of foreclosures. Hertel recounts how a company called ‘Doc-x’ hired people to quickly and fraudulently sign her name.

“We found, uh, hundreds of documents signed by Linda Green and others that were robo-signed,” he adds.

He says another organization — MERS, or “Mortgage Electronic Registration Systems” — triggered more than 700 foreclosures in the county the last three years. Courts later declared them illegal. Hertel supports a measure by Genesee County Democrat Jim Ananich that would require a judge to review all documents. About half of U.S. states currently use some form of judicial review. Michigan reformers hope for hearings on the issue this fall.

Attorney Geoff Walsh with the non-profit National Consumer Law Center in Boston tracks reform efforts around the country. Walsh says the banking industry tends to resist such reforms by offering a bogus concern — that they inevitably mean having to limit loans and raise interest rates. He says odds of effective reform depend on legislators’ willingness to dig for facts.

“Some legislators have the ability to look for facts to actually support those types of charges and others get swept up in just defending whatever banks want them to defend,” says Walsh.

The Michigan Bankers Association says fraud should never be tolerated, but it opposes Ananich’s bill.

“There’s already laws against fraud so those things should be addressed under the current legislation,” says association spokeswoman Gail Madziar.

Madziar adds that what Michigan needs most to combat foreclosure is jobs.

Michigan House Banking Committee chairman Marty Knollenberg (R-Troy) says he’s open to a discussion of judicial review, but it needs to come after a careful assessment of recent measures designed to ease the burdens of foreclosed homeowners.

“We have a study group scheduled and it’s my hope that (to) consider all of the different options available to us and (it could) perhaps be a tool,” he says.

That work group begins meeting this week. It includes Rep. Ananich, who is cautiously optimistic.

“I think if we do this in a bi-partisan way it’s really a part of that reinvention of Michigan that the governor talks about,” Ananich says. “It’s just a better way of doing it.”

He hopes presenting it that way will get more Republicans to take a closer look. Ananich, Hertel and others say that getting judges to look over questionable foreclosure documents would expose a shadowy process to the sunlight it needs.