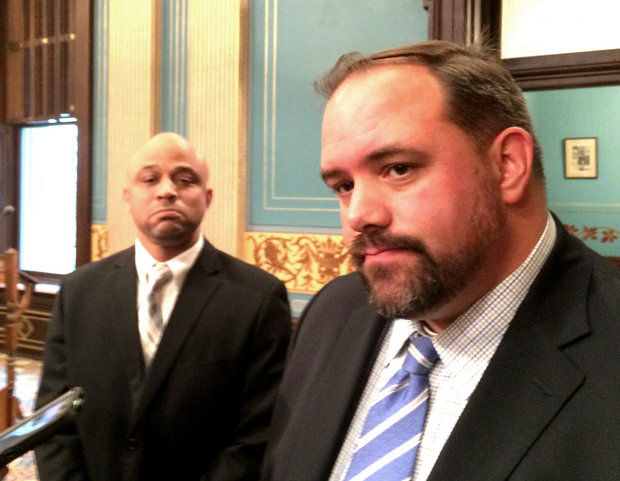 By Jonathan Oosting | joosting@mlive.com on November 06, 2014

LANSING, MI — Democratic Sen. Jim Ananich of Flint is set to become the next Senate Minority Leader in the Michigan Legislature.

Ananich was selected Thursday by Democrats who will serve in the 98th session, which begins in January. They’ll be greatly outnumbered by Republicans, who already held a 26-12 supermajority in the upper chamber and picked up an additional seat on Tuesday.

“We’re always proud to be Democrats, and we’re proud of the caucus we have,” Ananich told reporters Thursday. “It may be a little smaller, but we’re united, and we’re going to work for the constituents that sent us here.”

Current Senate Minority Leader Gretchen Whitmer of East Lansing will end her service in the upper chamber this year after running up against term limits.

“I’m no Gretchen Whitmer,” Ananich said. “She is an amazing leader — I would argue probably the best communicator in both chambers of both parties.”

The Senate Minority Leader is responsible for leading the caucus, negotiating with the majority party and the governor’s office, and giving voice to opposing views. Sen. Morris Hood, D-Detroit, will serve as Floor Leader next session.

Ananich, 39, is a relatively fresh face in the Senate, having won special election to the upper chamber in 2013. But he could be around for a while. State law will allow him to serve for two full four-year terms in addition to the partial one.

Ananich served on the Flint City Council for four years before winning election to the state House in 2010. He secured re-election to the Senate on Tuesday by winning 77 percent of the vote in the heavily Democratic 27th district.

While he’s been in the minority in both chambers, Ananich has shown the ability to find common ground on bipartisan legislation.

Since joining the Senate, he’s sponsored three bills that have become law, including one that was part of a bipartisan package to increase criminal penalties for drive-by shootings.

He also sponsored four House bills that became law, including one that was part of a package designed to curb scrap metal theft.

“I think I have an ability to work across the aisle and at the same time when I need to be strong, and be a voice for opposing ideas, I think I’ve shown that I can do both,” he said.

Sen. Arlan Meekhof, R-West Olive, is expected to win a pending vote to take over as Senate Majority Leader for Randy Richardville, who is also term limited.

Over in the House, Republican Reps. Kevin Cotter and Al Pscholka are each running to replace term-limited House Speaker Jase Bolger. House Minority Leader Tim Greimel is expected to stay on in that post.